The winery is located in Florida City, which is that last city before you hit the keys.  So it’s kind of a hike, but I’ve heard really good things about it, so we decided to make the trek.  It was definitely worth it!  When you walk in, you can purchase bottles of wine or a tasting.  If you get a tasting, you go to the bar and the bartenders let you choose the wines you want to taste.  I chose coconut, lychee, guava, passion fruit, and Cat 3 (a combo of guava, lychee and starfruit).  My friends had a mango wine, but I’m not allowed to drink that one because I’m allergic.  😦  The coconut wine had a buttery flavor, which I didn’t like, but I can see how it would pair well with seafoods.  Most of the wines were very sweet.  They had an avocado wine that was more dry, but I didn’t try that one.  The lychee was too sweet for me.  I liked the combo flavor of the Cat 3 (the name is a nod to the frequent florida hurricanes).  Guava was good, but passion fruit was my favorite because it had a tartness to it that the others didn’t have.  They also have a brewery there, but I didn’t try any of the beers. 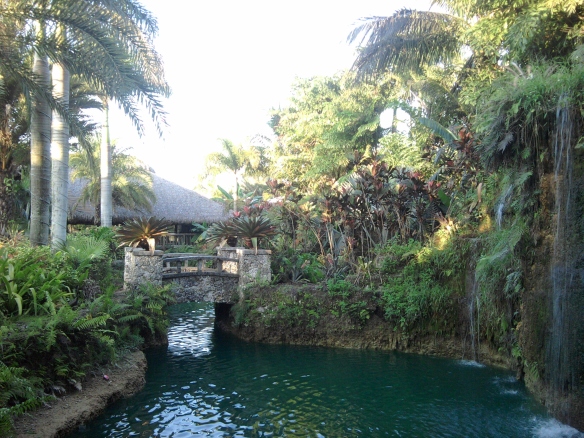 Once we did our tasting, we wandered outside to check out the grounds.  It is absolutely beautiful there!  They have coral waterfalls, waterways with koi fish, tons of tropical foliage, and huge chiki huts.  We found out in the tour that they are not hawaiian tiki huts, but chiki or chickee huts made by local Mikosukee and Seminole indians that are built to withstand hurricane winds.  One chiki hut holds 500 people and I’m told they have awesome karaoke on Friday’s and a live band on Saturdays.  The bartender told us they had a crowd of almost 900 there the night before.  So I can imagine it’s quite a party!  You’re allowed to bring your own food and drinks or they have a catering company that serves barbeque.  It sounds like it would be a fun time at night or a great place to hang out for an afternoon with some friends and a few bottles of wine.  It’s a shame that it’s so far away!  But it’s certainly a place that you could stop at on your way to or from the Keys!

The tour was a bit long, but we found out a lot about how the winery started and the plans they have to make it a big destination (complete with an ampitheater since the Hard Rock is planning to build a casino nearby).  They also are waiting on a liquor license to begin selling some tropical fruit liquors.  One of the most interesting things I learned is that most tropical fruit wines are made of mostly concord grapes imported from elsewhere with some tropical fruits added in.  Schnebly’s uses starfruit as their base and it’s all grown right here in Florida.  I also learned that some alcohol’s such as Arbor Mist (one of my favorite cheap drinks from college) is made from potatoes with artificial flavors added in.  I think I’ll definitely pay more attention to what’s actually in my wines from now on.